Huff documented the homeless on the streets of Phoenix, AZ, over a 2 year period; he would sit down and get to know each of his subjects personally, finding out about each of their own situations. Huff would help them with food, water and money, in exchange they opened up to him about their story and let him take photographs of them. Huff said himself about his work, ‘Instead of walking by and staring and sniping photos which is disrespectful I took my time to get to know each and every one of the people’; by doing this, his photographs were very intimate and personal, not only to Huff as a photographer but also to the people he photographed. To emphasise this personal quality to his photographs, Huff accompanied his photographs with text, explaining about each person and his experience when meeting them; this accompanying text helps the viewer to also get to know each person on a more personal level and lets them hear the homeless people’s stories. 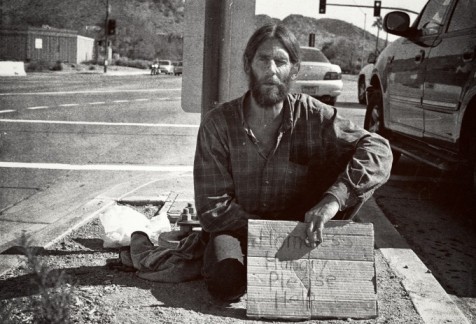 I feel that this photograph shows the theme of homelessness well; as seen in many films, Gary here is holding a makeshift sign asking for help. He looks to have very few belongings and those he does have are sheltered behind him, showing that they are important to him as he has so little. The cars to the right are just driving by without considering or helping Gary; to me this shows the idea that society and people often ignore and walk past homeless people on the streets, without helping or considering them, many people want to avoid homeless people. However if it were not for the sign and sitting on the floor, at distance, the viewer would not be able to tell he was homeless, showing how even homeless people are just humans, who once had a family and life. 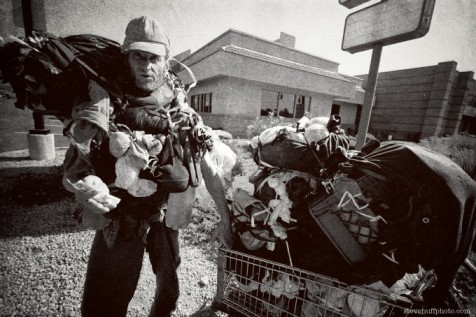 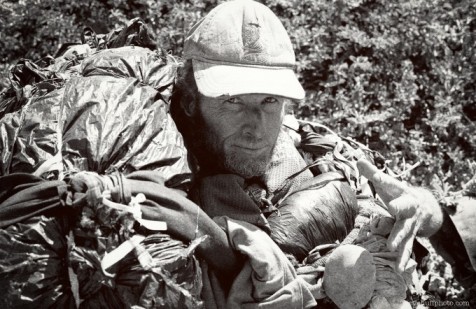 Huff’s photographs are divided into sets, each with one homeless person as a subject, in these separate sets there are often more than one photograph per person; I feel that having more than one photograph of each person works well, as it allows the viewer to get to know each person better, further emphasising the idea of being personal. These two photographs of Stanley work well together as they show his personality as well as his belongings; the first photograph gives the viewer perspective on how little he has- there is only enough to fill a shopping trolley and his arms. The second photograph shows Stanley with his belongings around his shoulders, to me this shows the idea of how precious they are to him, and that he wants to keep them close to him as he does not want to lose them, like he lost everything else. He filled his shopping trolley with stuff out of the garbage and uses it for survival, such as old clothing and food waste, I like the idea of how this is rubbish to most people, yet to Stanley it is a means of survival and it is very precious to him. I feel that these pictures work well together and give the viewer greater detail on his life, if they were on their own I feel that it would not be as effective, especially the second photo; if this was on its own it would give the viewer the wrong idea that he had many items, having two pictures gives perspective.

Luvera’s Residency project consisted of a series of large-format Assisted Self-Portraits, landscapes of Belfast and documentations of Luvera’s working practice through production polaroids and normal photographs. He photographed homeless people living in Belfast for around 16 months. Luvera explored the problems facing documentary photography and photographic representation of social issues, Luvera also looked at the ideas of tensions between the ethics involved by taking a photograph about someone’s life, and the authorship (the artistic control). To do this Luvera established long-term relationships with his subjects and got to know them, establishing trust and building knowledge about their lives. Furthermore, Luvera questioned his position as photographer in relation to his subjects, considering the role of the camera within the relationship. Luvera produced self-assisted portraits, showing this idea of power and the relationship between him and his subject was very personal and equal; the photographs were of a collaborative nature unlike most photographs based on homelessness, he wanted to give his subjects the power. The idea of giving his subjects power could be seen as quite ironic as many homeless people have little power or status in the world, this was an opportunity for them to take control for once. 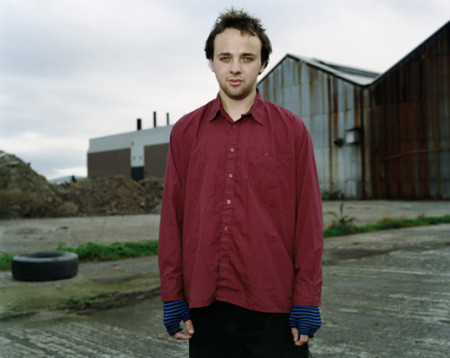 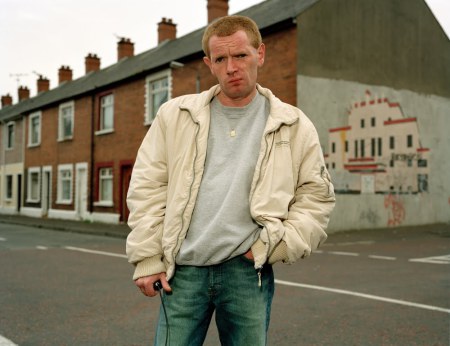 In all of these photographs, the viewer can see the subject holding the remote shutter in their hand, so that they can take their own portrait, this makes the photographs very personal to each individual, as they have to select that precise moment as to when they take the photograph. This personal quality is emphasised as each person has their own unique background, possible showing where they live on the streets or their favourite place. I feel that by having a range of backgrounds the viewer can begin to make up their own story about each person and their life. None of the subjects are smiling in their frame, whereas many people would smile if they were having their portrait taken, because these subjects aren’t I feel that they are different from society, linking to the idea that people often see homeless people as outsiders and not part of society. Furthermore the lack of a smile could show the idea that their life is hard and there isn’t much to smile about, they have to survive living on the streets and this has affected them and their personality. I feel that even though the subjects are not smiling they look quite at ease with the camera and having their picture taken; this links to the idea of power and the relationship between the camera, subject and photographer, maybe because Luvera has given them control with taking the actual photograph they feel powerful and therefore more comfortable. To me these pictures do not focus on the subject of homelessness, but more on the people and their personality; many people would not know they were homeless by just looking at them. In my own work I could look at the idea of not showing the obvious stereotypical photographs of homeless people, that show them clearly as homeless. I will also take influence from Luvera and his idea of power when it comes to taking my photographs, I do not want to over power my own subject and so I will look at building a relationship with them first, and make sure that they are happy with me taking their photograph.

Morton photographed the daily lives of homeless people in New York City, documenting their makeshift dwellings, homes and gardens, and how they have tried to build a life with the little material they have available. Many of the items these homeless people used to survive were basic; tin, cardboard, bits of wood, used in abandoned tunnel, parks, vacant lots. She got to know her subjects, recording their stories on tape, making each photograph personal to her as she knows that subject well. Morton even witnessed these dwellings being destroyed in a matter of seconds, after they took so long to build, and she witnessed the people cope with this and the threat of being homeless. The difference between Morton’s photographs and those of Jacob Riis (a social documentary photographer) and other nineteenth-century charitable reformers, who viewed the inhabitants of slums with distaste and disdain, was Morton got to know her subjects personally and photographed them in a more positive way. Morton seeks to know her subjects, inviting her subjects to participate in the photographs and arrange themselves how and where they want rather than choosing for them. By allowing her subject to be involved in some of the decisions for the photographs, they will feel more at ease and comfortable, it will also make the photographs more personal. Many of the photographs show the homeless peoples’ environment they create as a home within the larger environment of the city; this gives the viewer perspective, as well as making the photographs relatable, the viewer may know some of these places and often just walk by. The viewer can’t imagine themselves in those spaces, even though they are just on their doorstep, to them the spaces mean nothing, however to the homeless people they are a means of survival; people just walk on by past homeless people, without even noticing them. Morton wanted to capture the survival of these people, and not to stereotype or pity them; some photographs show possible joy and pride of what they have created, which seems odd to the viewer that even people in these conditions can still smile. Morton created a photobook- Fragile Dwelling, Photographs and text by Margaret Morton; the text (often about the person or their situation) in the book combined with photographs urges deeper imagination from the reader, as to what it would be like and gives them greater awareness, it also make each photograph and viewing them more personal as you are welcomed into that homeless person’s world and you are told about them. 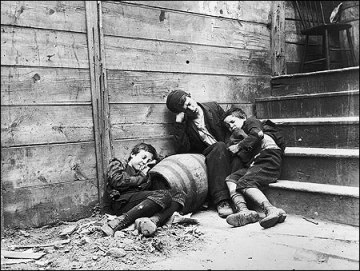 Jacob Riis- How the other half lives

In contrast to Morton’s ideas and thinking behind her photographs of homeless people, Riis can be seen to be looking down on them with distaste and distain; this is shown just by the title of his photographs. ‘How the other half lives’ immediately separates himself from them, they are seen as the lower half, and not as an equal to Riis. Riis photographs his subjects from more of a distance compared to some of Morton’s work which is quite close, making her photographs more personal. Even though Riis believed everyone could come out of poverty with help, by branding the homeless with words such as poverty I still feel he is separating them from society. In Riis’ photograph I feel he shows the homelessness of these children well even if it is from a distance, they are all huddled around the barrel which is possibly their only form of shelter and belonging. Morton also shows the belongings of the homeless person Hector, however I feel she shows it in a more personal way, it is taken inside his home, showing she has been allowed in, and Hector is sitting surrounded by his belongings. I feel Morton’s photograph shows how these items are important to Hector, and that is why he is sitting amongst them. Morton’s photograph focuses less on the homeless but more on Hectors personality and belongings, compared to Riss’ work.

From my research I have gained much knowledge about different homelessness photography methods; I feel that like Morton, Luvera and Huff, getting to know any homeless person I photograph would be important and make my photographs more personal. However, when looking through the photographers’ work it is clear that the main focus has been of the people, documenting their lives; I want to look at something different to previous existing photography work. Taking influence from Morton and Huff, I want to look into the idea of belongings of a homeless person, and what is important to them; I could photograph places that homeless people would use as shelter and the items that we often throw away as rubbish, but that homeless people could use as survival.